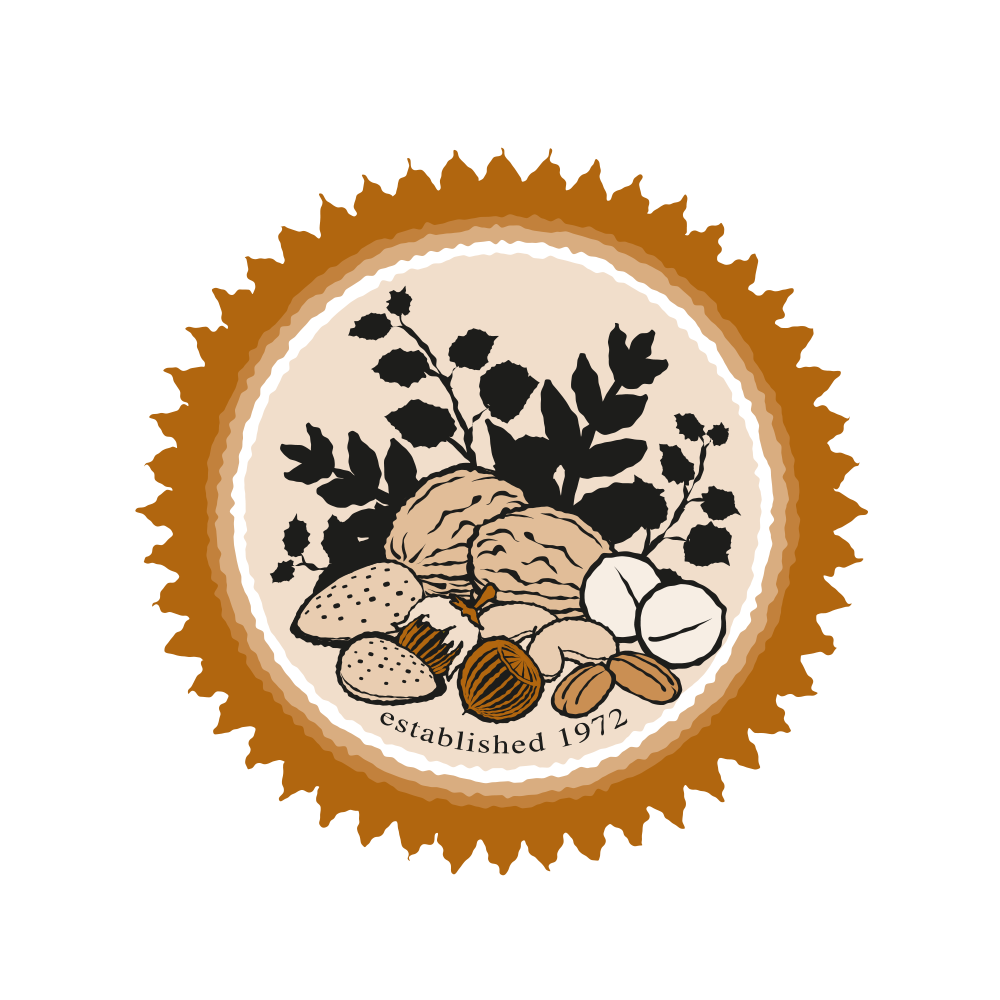 It is believed almonds originated in ancient China and Central Asia. Explorers of that time, travelling along the Silk Road carried almonds with them as food. The land they were travelling through, with long hot summers and winter rains, proved to be ideal growing territory. Almonds flourished in Mediterranean countries, with Spain and Italy becoming the first major almond producers. When Spanish monks settled inland in California, they found areas perfect for the cultivation of almonds. Almonds are now the number one tree crop in California.

Almonds grow on trees closely related to (and therefore similar to) peach trees. Almond kernels grow within a hard shell encased in a tough green hull that splits at maturity.

The almond is a versatile and stable nut ideal for savoury and sweet products alike. Applications include use in biscuits, cereals, cakes, marzipan, confectionery items and as snack products, either raw, or roasted and salted.

The first historical reference to brazil nuts dates to 1569 when a Spanish colonial official collected them to replenish his troops. The Dutch then began importing them to Europe in the 17th century.

Brazil Nuts are the seeds of trees which grow wild in the Amazonian rain forest. These trees grow to 250ft and are 500-1,000 years of age. The nuts themselves are shaped like orange segments, are extremely hard and found in clusters of 10-25 per pod.

The pods are collected once they have fallen to the ground. This happens primarily during the wet season when the rivers are used as an important mode of transportation.

The collection of nuts has little impact on the ecology of the Amazonian forests and the industry is an important source of income to the local people.

The nuts can be enjoyed raw, roasted and salted and are also popular in baked goods, confectionery products, cereals, ice cream and various dessert items.

The cashew tree (Anacardium occidentale) is a tropical evergreen tree that produces the cashew seed and the cashew apple. The cashew plant is native to northeast Brazil. From there, it spread throughout Southeast Asia and eventually Africa. It can grow as high as 14 m (46 ft), but the dwarf cashew, growing up to 6 m (20 ft), has proved more profitable, with earlier maturity and higher yields. The true fruit of the cashew tree is a kidney or boxing-glove shaped drupe that grows at the end of the cashew apple. The drupe develops first on the tree, and then the pedicel expands to become the cashew apple. Within the true fruit is a single seed, which is often considered a nut, in the culinary sense. The seed is surrounded by a double shell containing an allergenic phenolic resin, anacardic acid, a potent skin irritant.

While the cashew plant is native to northeast Brazil, the Portuguese took it to Goa, India, between 1560 and 1565. From there, it spread throughout Africa & Southeast Asia. Today cashew trees flourish in tropical areas near to the equator.

Major production of cashews kernels occurs in India & Vietnam. Whilst India is the world’s largest producer and consumer of cashew kernels, Vietnam is by far the world’s largest exporter of cashew kernels. The kernels are eaten raw, salted and roasted, used in sweets and in various South East Asian cuisines or processed into cashew butter. The shell of the cashew seed yields derivatives that can be used in many applications including lubricants, waterproofing, paints. The cashew apple is a light reddish to yellow fruit, whose pulp can be processed into a sweet, fruit drink or distilled into liquor.

Hazelnuts originated in Asia and spread to Mediterranean countries, by way of ancient Greece. Today, Turkey is the world’s leading supplier of Hazelnuts (75% world production) and Italy, Spain, Greece and the USA (Oregon) are also important growers.

In Turkey the hazelnuts grow within a zone 30km from the Black Sea and the industry plays an important socio-economic role.

There are more than 100 varieties of hazel trees which are related to birch trees.

The main Turkish varieties are Giresun and Levant. The Giresun variety hazelnuts are round shaped of a very high quality and are easy to blanch. The Levant Hazelnuts are grown outside the Giresun area and are lower in fat.  Hazelnuts are widely used in confectionery, cakes, cereals, fruit and nut mixes and are also the key ingredient in delicious praline.

Increasingly referred to as the ‘Gourmet Nut’, macadamias are becoming increasingly popular around the world due to their versatility and unique delicate flavour.

Macadamias (also previously known under different names such as ‘bauple nut’ and ‘bush nut’) were an important part of the diet of Aboriginal Australians. The current formal name was given by botanist Baron Ferdinand Von Mueller, in deference to his good friend Dr John Macadam. Previously unknown to Europeans the macadamia was discovered between 1828 and 1860. In the 1880’s, macadamia seedlings were imported into Hawaii which in the 1920’s and 1930’s then became the most important commercial grower.

Today Australia is the largest producer of macadamias are also grown in sheltered sub tropical areas such as Brazil, Costa Rica, Hawaii, Malawi and South Africa.

Macadamias are now widely used in the confectionery, baking, ice cream and snack food industries. C.G. Hacking & Sons works closely with a variety of origins and can offer kernels, nut in shell, macadamia oil, as well as value added products.

Pine nuts are the seeds produced by certain varieties of pine tree which grow in the forests of countries such as China, Italy and Spain as well as the USA and Pakistan. They are found in the pine cones and covered in a hard shell. Since the nuts are harvested by hand in uncultivated regions, they are often quite expensive.

Pine nuts are creamy white and have a slightly resinous flavour. They are widely consumed in salads or are ground to make pesto sauce.

Copper, phosphorous, thiamine and Vitamin B6.

Pistachio Nuts date back to 1000 B.C. and the origin of the nut lies in the Middle East. Pistachio nuts were enjoyed by the Queen of Sheba. In the 1880’s, the Pistachio Nut was imported into the USA, where it became a popular snack.

It is no surprise, therefore, that Iran and the U.S.A (California) account for the lion’s share of world production.

The Pistachio is related to the cashew and mango. Pistachio nuts grow in grape-like clusters on trees and are encased with a hull. As with pecans the trees are alternate bearing.

Pistachios are consumed mainly as a snack nut, either in shell or in kernel form. They are also often used in cakes, salads and ice creams.

Copper, phosphorous, thiamine and Vitamin B6.

Pecans are the fruit of the hickory tree and originated in North America. Their history can be traced back to the 16th century. The name ‘pecan’ is a native American word that was used to describe ‘all nuts requiring a stone to crack’.

The first cultivated plantings are thought to have been by Spanish colonists and Franciscans in northern Mexico in the late 1600’s or early 1700’s. The first planting in the USA was in Long Island in 1772. Trees were then also planted in gardens of people such as George Washington who lived along the eastern seaboard. By the 1800’s, the pecan industry was born.

The wonderful aroma and full taste of pecans has made them a popular ingredient in cakes, pies, confectionery and ice creams. They are also widely used in the snack industry.

Walnut trees are one of the oldest trees known to man. It is believed that Walnuts originated in Persia and were commonly used as a trade item by the English. Excavations in the Perigord area of France revealed roasted shells of nuts from the Neolithic period 8,000 years ago. There is also evidence that walnut groves grew within the Hanging Gardens of Babylon.

Walnuts are widely used in cakes, confectionery, desserts and salads.